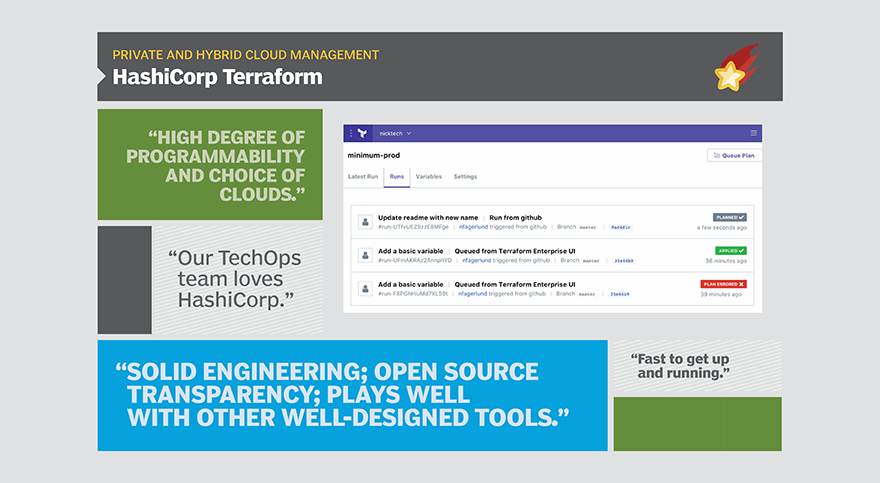 Effective private and hybrid cloud management hinges on a number of tasks, ranging from performance monitoring to cost optimization. But increasingly, it also incorporates infrastructure as code -- at least, that's what 2018 Impact Awards voters seem to suggest.

HashiCorp's infrastructure as code (IaC) software, Terraform, is this year's winner of the Best Private and Hybrid Cloud Management Tool category. And while not all enterprises have adopted IaC for cloud infrastructure management, the technology certainly has its benefits, said Chris Gardner, senior analyst at Forrester Research.

With Terraform, admins can automate provisioning across cloud platforms such as Amazon Web Services, Azure, Google Compute Engine and on-premises private clouds, including those based on OpenStack. The number of platforms that Terraform supports helps set it apart from other IaC tools, Gardner said.

"There are over 70 [targets], many written by the target companies themselves," he said. "These include AWS and Azure, but also old-school VMs, some PaaS and SaaS systems, and even some physical hardware."

To define the infrastructure components they need via Terraform, admins use a command-line interface and configuration files. The tool also provides resource graphs, which help IT teams gain visibility into their cloud resources, the dependencies between them and how a particular change could affect their overall environment.

Voters chose Terraform for a variety of reasons, among them: the fact that it's open source, it supports a long list of cloud platforms and it is highly programmable.

"Terraform provides consistency of approach and an open source model, which is critical for cost containment and extensibility," one voter wrote.

Granted, not every organization -- at least not yet -- will implement IaC as a way to manage private and hybrid clouds. It's still an emerging technology, often coupled with DevOps initiatives, and will come with a learning curve for some IT teams, especially those that support a large number of legacy applications.

Other potential challenges with IaC tools include configuration drift and admins attempting to change configurations outside an IaC tool. To successfully implement the technology, organizations should be sure to document all changes made with IaC and be diligent about version control.